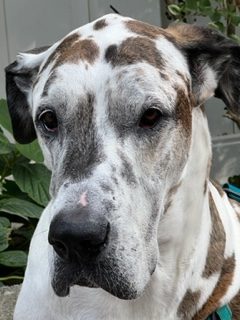 Well it has been an interesting couple of weeks.  Thank you for the comments and suggestions.   I discussed all of it with our vet and our oncologist.  The consensus seems to be we don’t know what’s triggering these night time attacks.   It reminds us of Sundowners syndrome.  My father suffered from it towards the end of his life and the symptoms are just so similar.  We are no longer using the Ace or the Trazodone.  Both knock her out to where she can barely walk and becomes extremely disoriented into the next day.  Dead lifting 110lbs is bit much for us especially with three dangly legs.  Tried weighted blanket, made no difference.  Tried a “snoodie” to block out noise, made no difference.  Tried no TV, no difference.  No phones, no difference.  However her episodes are now starting between 7:30 and 8PM every single night.  Chemo nights or not, no difference.  What was working for five nights was two Xanax 1.mg and one gabapaten.  Thought we were onto something and then last night at 11Pm the episode started again.  Heavy panting, unrest, some shaking, really wants to hit Peter (dad) with her front paw.  But the Xanax seems to be the best option for now.  Oh yes, we tried Prozac, no effect.  The chest xray and blood work from the oncology visit last week  were very good.  Lung nodule is staying the same with no spreading shown on the xray and not getting bigger.  However, the oncologist did tell me, Lynda, she is an old dog now.  At ten years and almost two months she would be considered an elderly dane definitely.  And almost 22 months as a tripawd is taking a toll.  She is now having issues with her rear foot.  Both doctors examined it and basically the toes are rubbing together and there is no fat there.  So we are dealing with that too.  She has also decided she will no longer eat her oncology diet.  No matter what adjustments I make to it.  So we are trying to find things she will eat.  Right now it seems to be a combination of freeze dried beef or chicken and a bit of canned Evangers  with some other good stuff I add in there.  She is skipping lunch which is alarming as she has been eating lunch since she was two months old.  So far her weight is maintaining but I’m expecting that to drop.  I’m preparing myself.  I don’t know that cancer is going to win here, actually I don’t think it will.  I think time is against her.  So, as usual we are enjoying every single minute of each day with her for as long as we have.  When speaking with Dr Rizzo she told me we have been very fortunate.  Some people do exactly what we have done and still do not get the extra time that we have gotten so we still feel very very lucky.  Any thoughts or suggestions would be most welcome.  In the meantime, here is Jessee 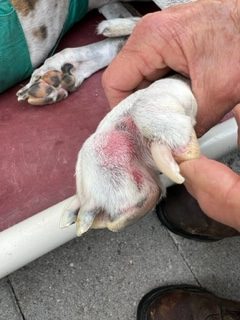 This is the sore rear foot. 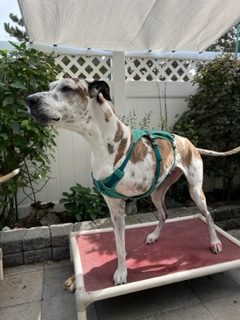 Barking at the dogs on trails behind our house. 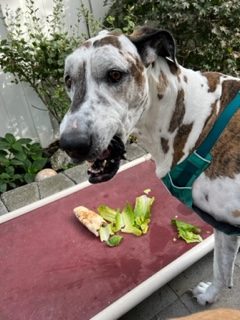 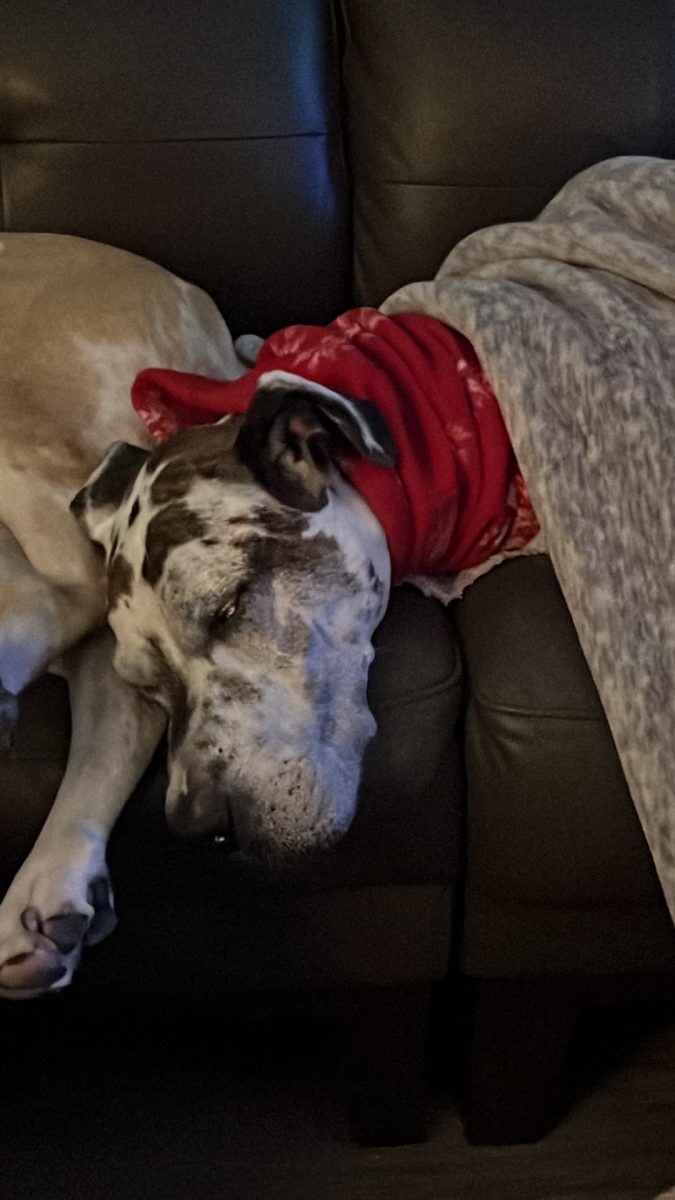 Knocked out from her double Xanax.

Jessee is now almost 21 months a Tripawd and is a ten year old great dane.  She is on her third battle with cancer, all different types.  We are currently taking an oral chemo that she is tolerating very well and seem to have the lung nodule under control.  However, we have a behavioral issue we are not able to resolve yet.  It’s now happening every night after she has had dinner.  Everything is calm, no strange noises (sometimes a text alert on TV will start it, sometimes not).  All of a sudden she will start panting, shaking and become very aggressive with her from foot.  She attempts to “hit” my husband or myself.  Nothing calms her down.  She has had Xanax, Gabapaten and combination 0f the two.  Neither works consistently.  We try taking a walk, going outside, holding her,  brushing her, attempting to distract her.  Makes no difference.  Recently we decided to try a “knock out” pill Acepromazine 25 mg.  It works.  One night we felt she needed two and it was too much.  One 25 mg seems very effective for the time being.  Fingers crossed.  After taking the pill within about ten minutes panting, shaking stops.  The episode is over and she will go get in one of her two beds and sleep for several hours.  I’m trying to understand what is this.  Our fabulous vet is reaching out within her community of behavior vets to see if they have seen similar behaviors and encouraged me to reach out here to Tripawds forum.  No one else seems to have seen this in Danes before.  Other than these nightly episodes she appears to be doing very well.  Gained another pound.  Eats almost every meal, more picky about lunch. 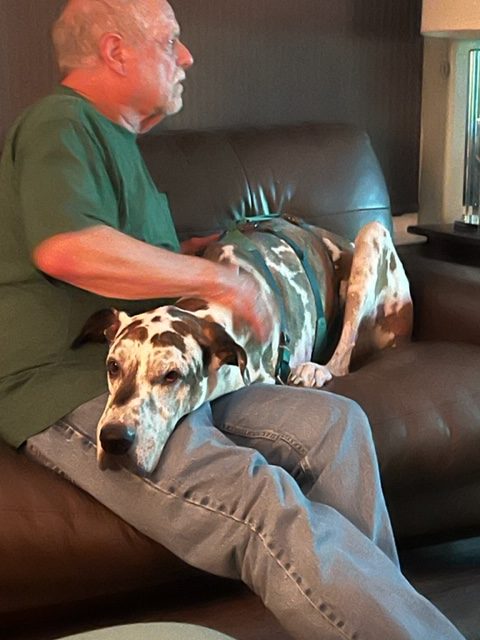 Would really, really appreciate any feedback from anyone … thanks so much

Day after chemo # 28!  Feeling just fine thank you very much.  Jessee absolutely loves laying on the porch, watching and listening with her no rawhide chew bone. 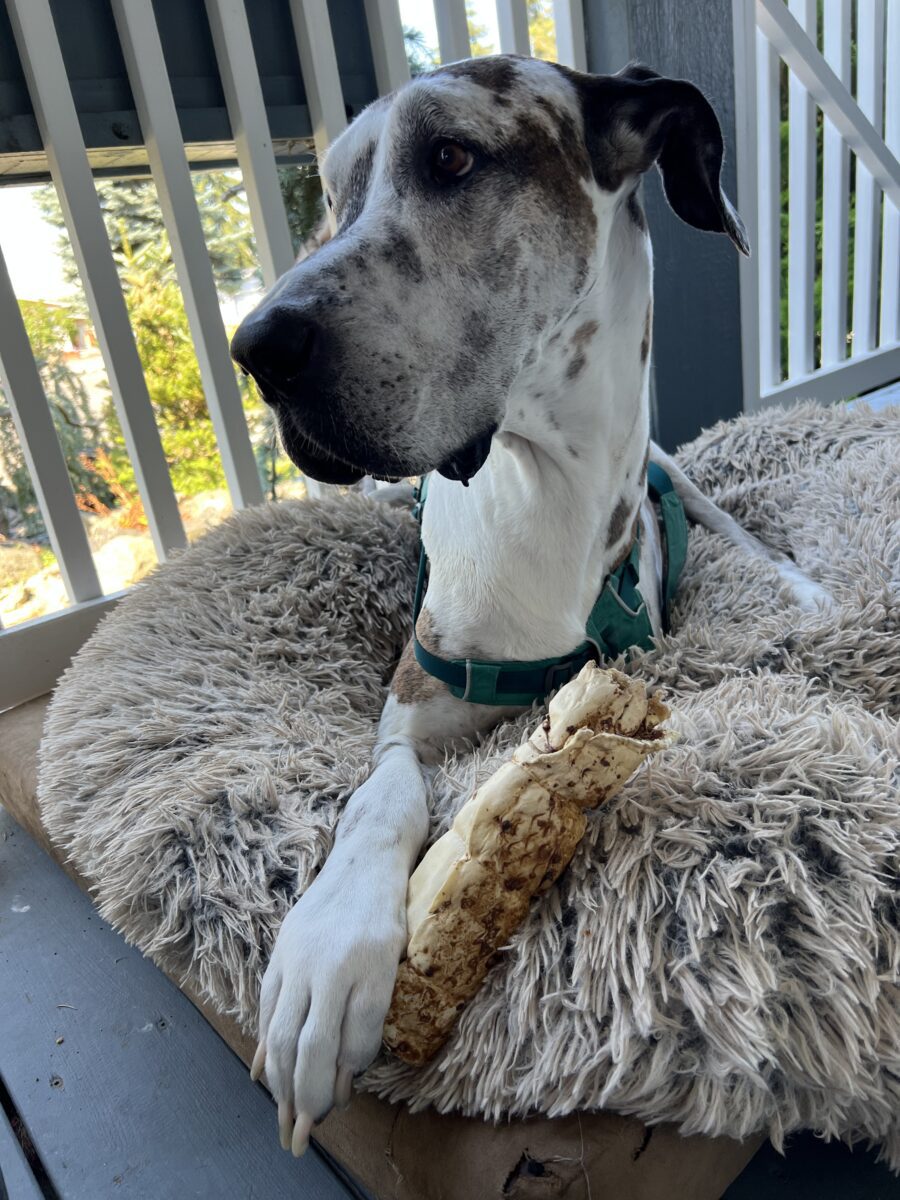 Until there is a noise, then gotta check it out 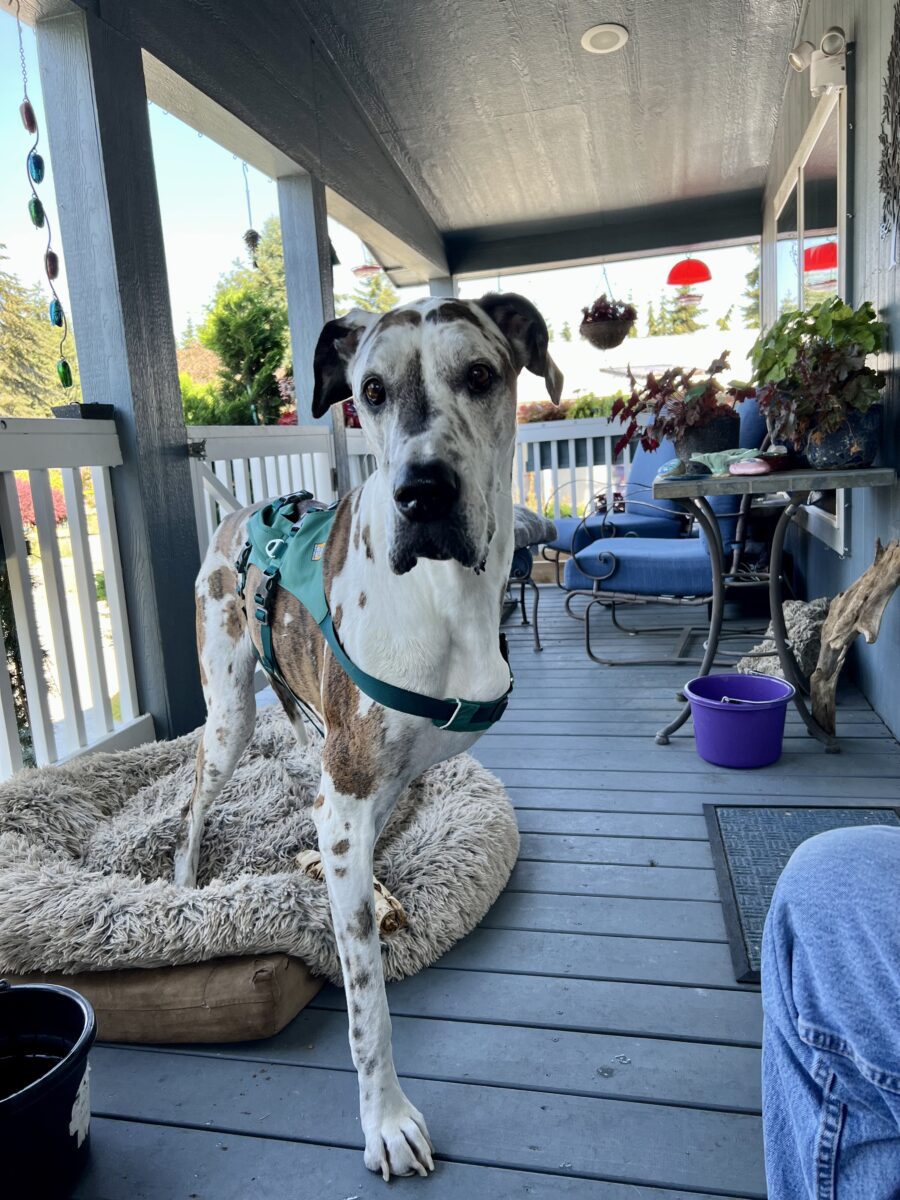 And I’m sure it needs a good WOOF 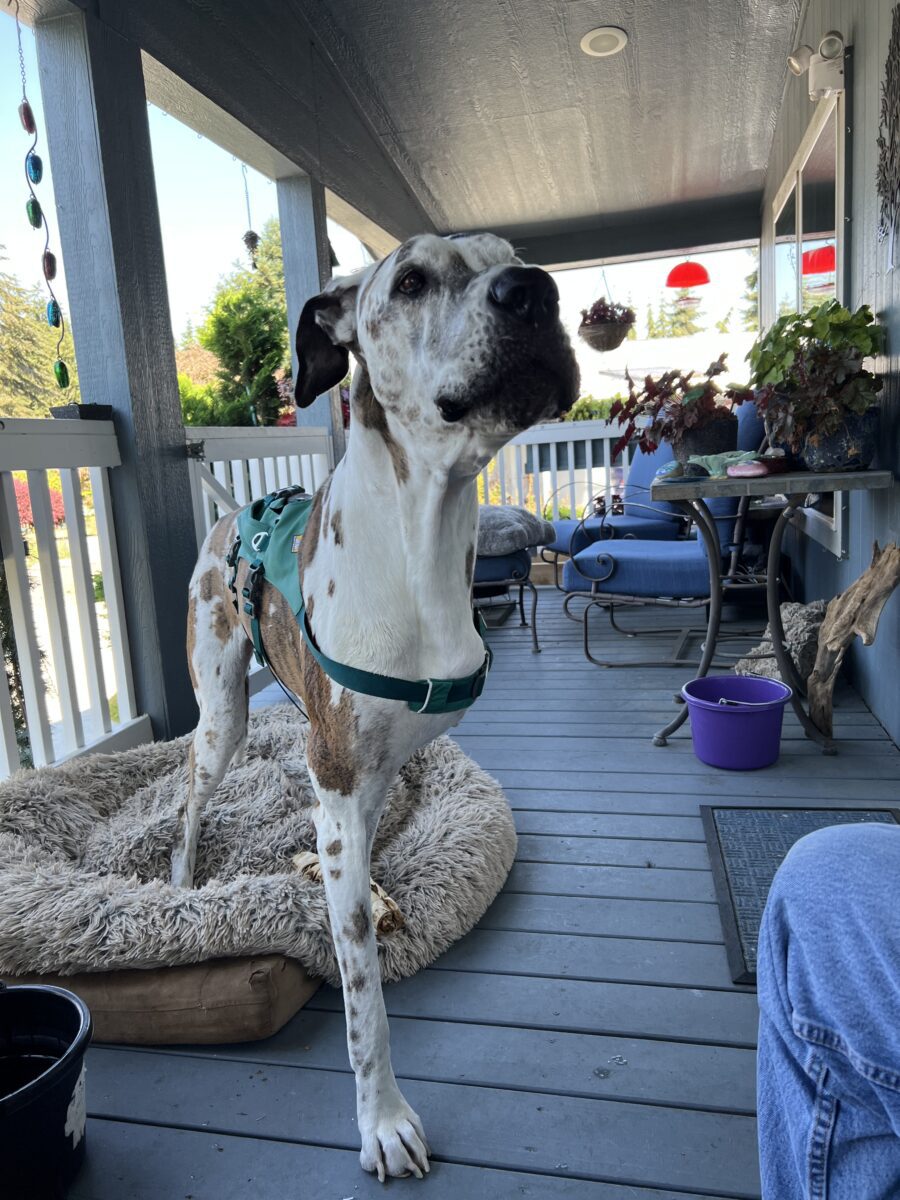 Loving my daddy and hey tongue out Thursday! 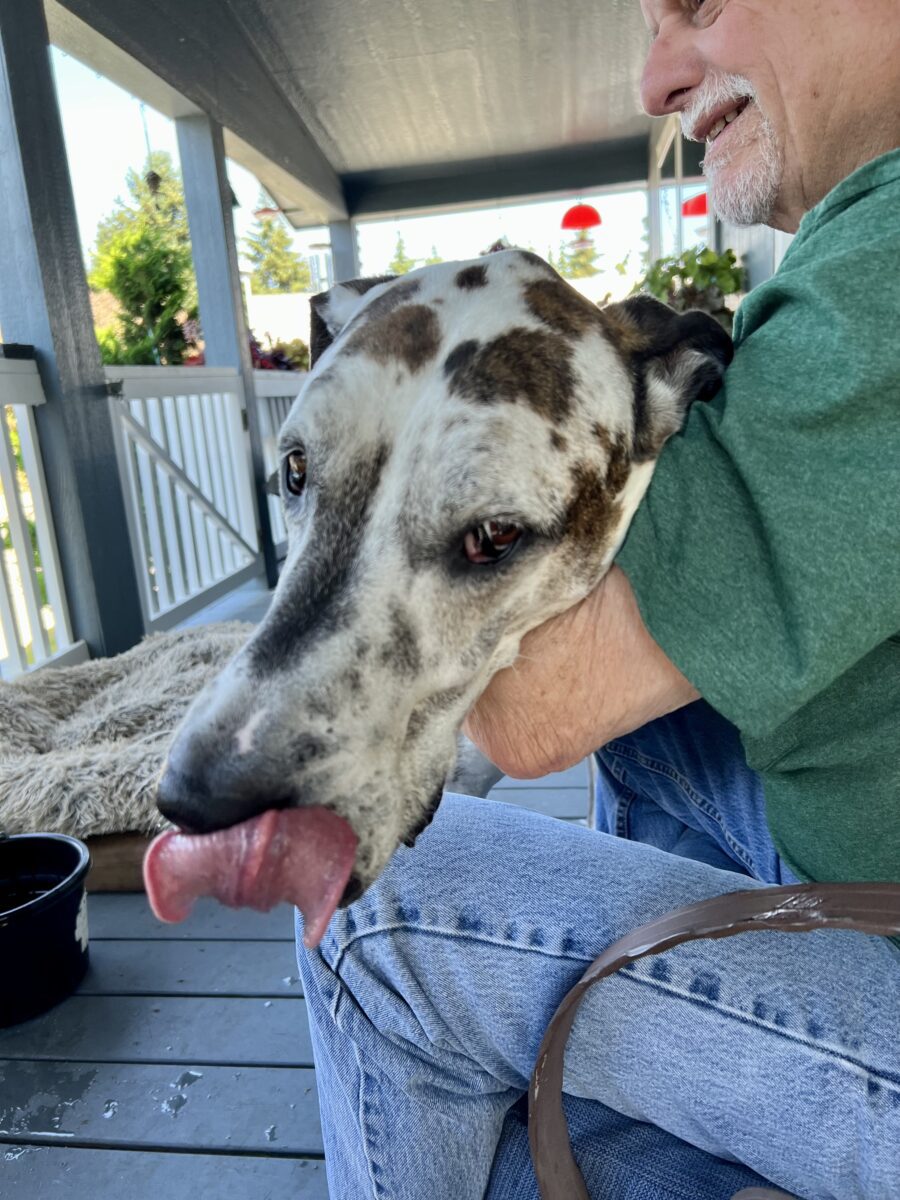 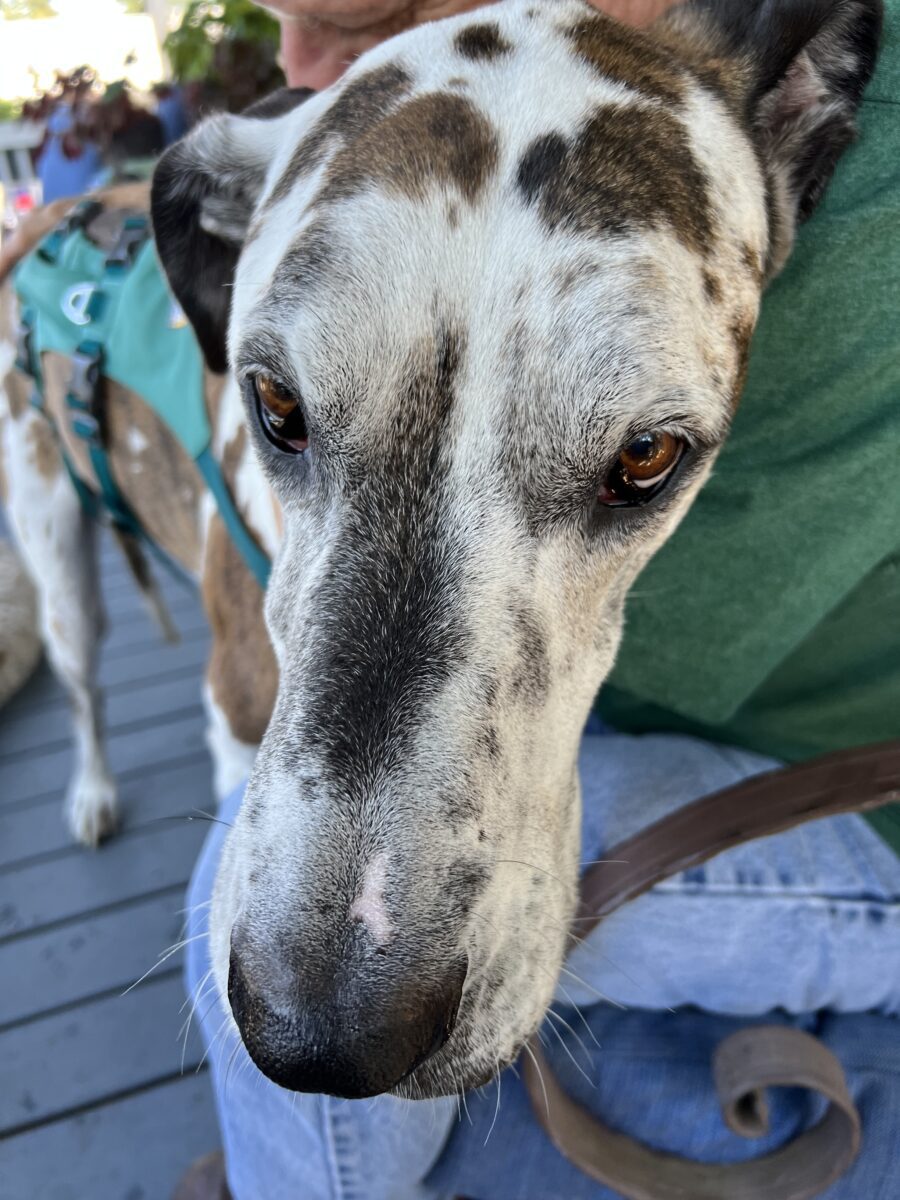 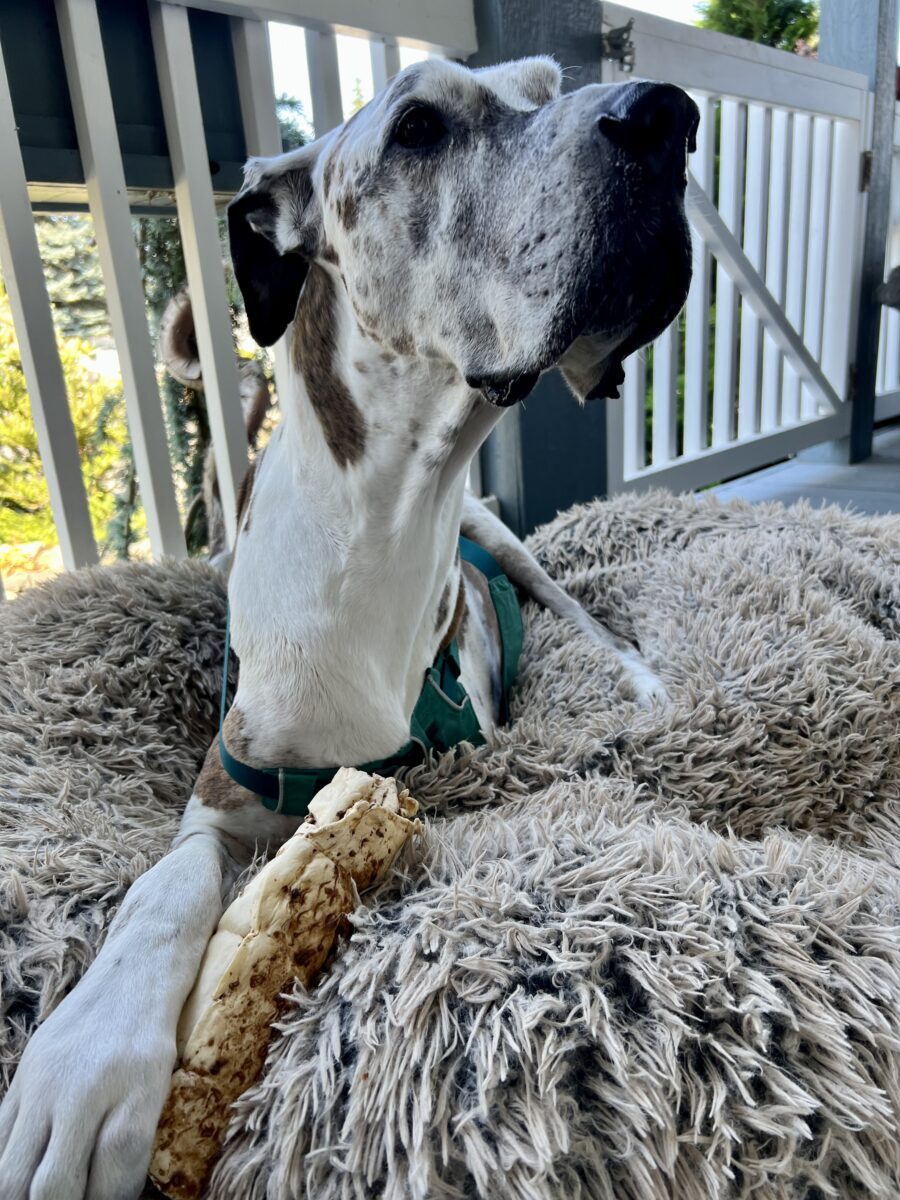 Then back to business with my chew.  Love licking off that peanut butter coating…

Jessee had a accupuncture treatment yesterday with her vet, Dr. Allen.  She always gets a very thorough check over before each treatment.  She continues to maintain her weight at 108.5 which includes her tripawd harness for some assisting and guiding (not much) mainly on stairs into the car.  Dr. Allen said she looks fantastic.  Muscles good and supple and good strength.  No swelling in front paw.  Jessee just kind of lounges on a thick memory foam pad that we donated to our vet that she seems to recognize.  Very patiently lays there while her needles are inserted and she just chills out.  She’s a great patient.  Jessee has had some more anxiety issues late at night where she pants and we don’t seem to be able to comfort her much.  Happens maybe twice a week.  After careful review of her meds and oncology treatment protocol Dr. Allen suggested that we put her back on a nightly dose of Gabapanten.   She tolerates that very well and it’s usually what we give her to calm her down during these episodes.  She took one last night and slept through the entire night very peacefully.  And again, this morning ate a full breakfast as usual. We lost a very dear FB friend, Lady Darla this morning.  She was 12.5 years old.  Jessee has been getting even more hugs today than usual.  Just living like a dog with her, being in the moment and enjoying each and every one.

First tada!  Jessee celebrated 20 months as a tripawd yesterday and she did it in style with treats, and barking at the birds and the clouds and anything else that crossed her domain! 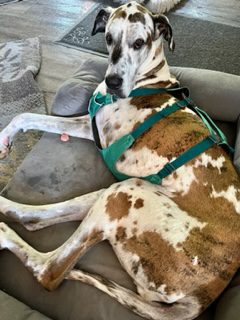 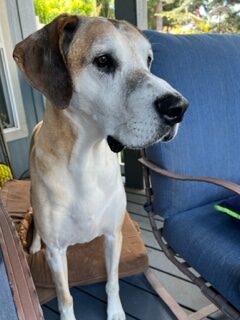 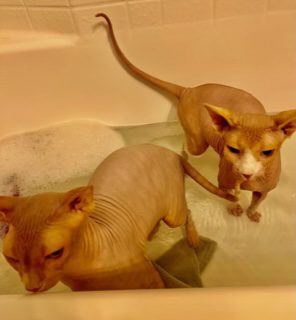 We are incredibly proud of Jessee.  She continues to inspire us and to just enjoy her life.  Tonight she is getting oral chemo treatment number 24.  Her X-rays this past Thursday with the oncologist showed no spreading of the nodule and it is staying the same size.  Ever onward!